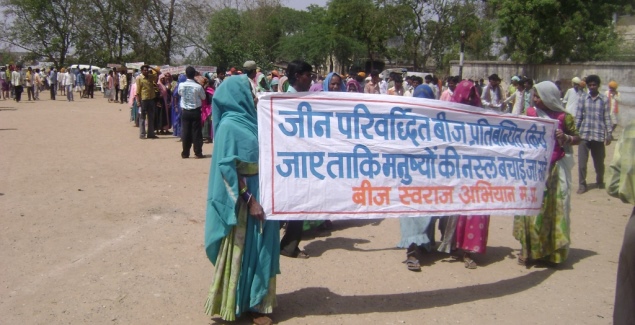 Sampark has launched struggle to ward off ill effects of globalisation on agriculture and livelihood. Because of foray of multinational companies in agriculture sector, this main source of livelihood in India seems to be going into the clutches of foreign companies. These companies change traditional agriculture and promote cultivation of items suitable to them.

This affects food security of famers. Moreover, they are entrapped in the web of cash crops in such a way that they become indebted. The main reason behind this is that seeds of these companies are very expensive, leading to steep increase in agriculture input cost.

Soon after BT Cotton cultivation invaded Sampark’s operational area, its negative points started to surface. Land fertility was reported to decline sharply and insects attacking the crop increased their resistance to insecticides. As a result more insecticides had to be used. The entire process destroyed land and insecticides affected humans, cattle and environment.

Nearly 4,000 farmers in Petlawad block used BT Cotton seed for cultivating cotton in 2004. But against the claims of the company they had to suffer losses. The company claimed that insects did not attack BT Cotton crops and ensured good quality yield. But the crop was infected with insects and the crop quality was of second grade. As a result, the farmers were indebted because of expensive seeds and insecticides. The company said the farmers did not adopt right technique.

Next year’s results were similar. But the company decreased price of seeds from Rs 2,200 per packet to Rs 750 per packet. Sampark feared repetition of the story.

To tackle the situation, Sampark carried out a study with BT Cotton cultivators to expose the claims of the company. A campaign was launched to make the farmers aware in this regard. Since cotton is cultivated all over Western Madhya Pradesh, other districts neighbouring Jhabua like Dhar, Ratlam, Badwani, Khargau, Burhanpur and Khandwa were also included in the campaign. A jan karwan (people’s travel with a specific purpose) was taken out for making the common man aware of the harmful effects of BT Cotton. It traversed through Petlawad, Meghnagar, Dahod, Bhabhara, Badwani, Lonsara, Burhanpur, Khargon, Dhamnod, Dhambod Mandi, Bheelgaon, Chhaigaon Mahkan, Khandwa, Simraul and Indore of Malwa-Nimad area. The karwan ended in the state capital Bhopal, formulated a resolution and submitted to the Government.

A network by the name of Beej Swaraj Abhiyan was formed in collaboration with the NGOs and CBOs working in these districts so that organised efforts could be in a systematic manner. Gram Sabhas adopted resolutions against Monsanto Company, the company producing and marketing BT Cotton seeds.

Demonstration was held at Jhabua against the company on May 7, 2005, and cartons of seeds and insecticides were burnt. Madhya Pradesh Government was apprised of the misdeeds of the company and pain of the farmers.

And the struggle continues.