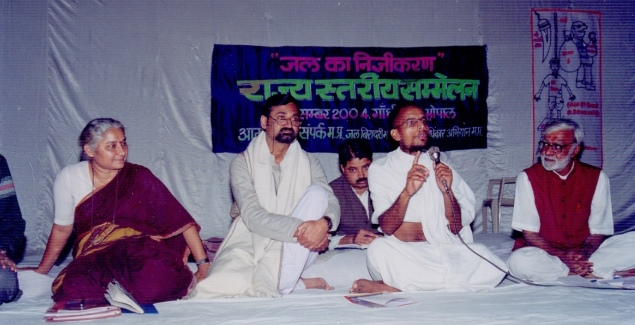 The state level workshop was organized to discuss the impact of globalization on most essential natural resource water which is the base of life. Because of the globalization affects the government bowed to organized market and allowed them to sell drinking water in from of water bottle across the nation which is a dangerous sign for existing humanity and on this most prominent issue government need to rethink and come out a pro-people policy.

Sampark took this development seriously and in collaboration with other prominent organisations of the country working on the issue of water, opposing privatisation of water under the banner of Madhya Pradesh Jal Biradari. The major objective of Jal Biradari is to make people aware about water conservation and management, organise groups and people working on water so that experiences can be exchanged and pressure be mounted on the Government to formulate people-oriented water policy.

For achieving objectives of Jal Biradari, it was necessary to create awareness among people. Sampark organised a series of workshops for making people aware of water issue. Sampark views water as a community resource on which the society has rights from time unmemorable and it should be kept out of purview of sale and purchase. The Government was formulating policies promoting water trading and snatching right of the society over water. Due to this Sampark has launched this public awakening campaign.